When good drains go bad, sewer leak repair could be your solution

Every sink, toilet, and drain in your home connect to your sewer line. When there’s a problem with this critical length of pipe, you’ll feel it throughout your home. How can you tell it’s time for sewer leak repair?

Marvin noticed his laundry wasn’t draining right, the kitchen side of the house it was backing up too. Even though he’d had the drain cleared several times, the problem kept coming back.

“It was just a hassle,” Marvin said. “It just needed to be fixed.”

You can’t fix something until you know what’s wrong with it. A number of plumbers had tried to perform sewer leak repair, but all failed to find the source of Marvin’s problem. That’s because none of them performed a video inspection of the old drain line.

“We cleaned it up with a jetter a little bit,” says Bob Connelly of Abacus Plumbing, one of Tom’s HomeShow Pros. “We then came back to perform a video inspection and discovered a giant hole in the pipe”

It was more of a cavity that ate away at the pipe over its fifty-to-sixty year life. As a result, it only got worse over time. That’s why putting off sewer leak repair is never a good idea.

The problem got so bad that any time Marvin would use the kitchen or the laundry, drain waters was literally coming through the old clean out and it was just going all over the place.

What makes these leaks so bad…

“The drain line goes all the way underneath the house,” Marvin told us. “Then, it goes to the city sewer witch is back at the easement.”

Fifty feet of corroded pipe under a cement slab is bad, ignoring the problem… is worse.

“Water sitting below the pipe, super saturating the soil under the foundation, when that happens the ground gets soft,” Warns Bob. “When the ground get’s soft, the foundation begins to shift, then you’ve got a whole lot more than just plumbing problems.”

Abacus Plumbing solved Marvin’s problem by tunneling under the house to access the laundry. Then, the rest of the drain was re-routed, running it through the back yard, and tying it into the main sewer line that is on the other side of the house.

Not only did Abacus Plumbing fix the problem, it’s now easier to access the plumbing should Marvin have any issues in the future. 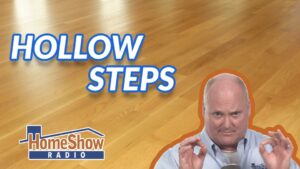 What can I do about vinyl floors that have a hollow sound under them? 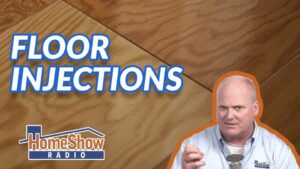 What’s the first for wood floors where the glue dries out? 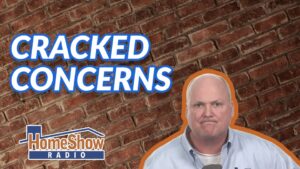 How can I tell if a crack in my bricks is a serious problem?